Waves are a series of undulations that occur on the sea’s surface and gradually increase in height; in more scientific words, they are characterized as sources of energy created by the power of the wind in an area of the ocean, which is formally known as fetch.

Waves can travel thousands of kilometers while increasing in size. The largest ones are formed offshore and the smallest ones are generated closer to the coast, although there may be some exceptions.

How do Ocean Waves Develop?  – A Very Brief Introduction

The waves that hit the Vietnamese shorelines are caused by tropical storms thousands of miles away which create Long Period Swell or by the prevailing Northeast Winds which creates Short to Medium Period Windswell. Local storm-driven surf can be too windy and choppy. Far away storms such as typhoons and polar lows create winds that result in waves that travel very long distances. 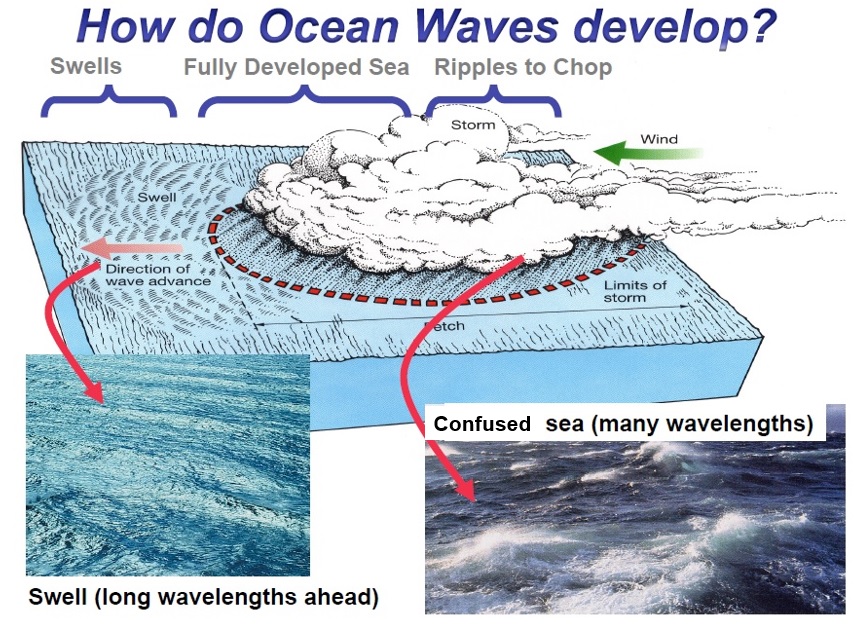 Waves that you surf are formed when the wind brushes the surface of the water exerting a ripple effect, also when there are variations in temperature and atmospheric pressure. There are three factors of the wind hitting the ocean water during these storms that affect the swell – fetch, velocity and duration. When winds (velocity) blow for a period of time (duration), over an area (fetch), a ripple affect is started. This ripple affect is similar to throwing a rock into water.

The ripple is a transfer of energy that when unobstructed can travel thousands of miles. When the water’s energy hits shallow rock or coral, a sandbar or a river mouth, the energy is transformed into a breaking wave. When the ocean energy encounters a shallow land mass and local conditions, the wave shows its true form. Local conditions including wind, tide, currents, ocean floor bathymetry and shoreline configuration will have an effect on the shape and size of the breaking wave.