Wave heights are generally measured two ways, Bascom Method and the Hawaiian scale. In scientific terms and most used by the surfing community around the world, the wave height is measured vertically from the trough to the crest and is known by surfers as face scale. 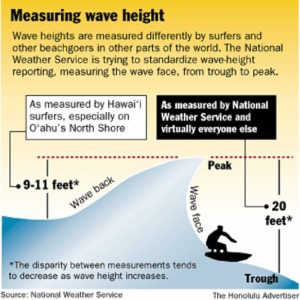 The Bascom Method, developed by Willard Newell Bascom, is widely regarded as simple, fair, and rational; yet an overestimation most of the time. One stands on the beach with eyes aligned with the wave crest and the horizon. He or she then measures the wave from that point to the average sea level.

In Hawaii, local surfers use the back of the wave to measure wave height and is called Hawaiian scale or local scale. The history of Hawaiian scale and the conversion itself are widely discussed and debated. The conversion from face to Hawaiian is roughly 1/2 to 2/3 the size measured from trough to crest.

The Hawaiian Wave Scale has a few disadvantages, though: